I already mentioned in my Wordfeud Helper article that Wordfeud on iPad really got me. I just wanted to share a screenshot from my iPad showing you how I started a recent game with two bonuses in the early rounds. I think I also got lucky and with MAINLINE and OUTLAWED I could have been able to accomplish this without the Wordfeud Cheat. Anyway, this was much faster 🙂
Now it is going to be a lot more difficult. I have ATXBGQT left on my rack. I am still waiting for my opponents move, but already prepared QAT on the board with Q on the triple letter field. It is always good to know two and three letter words that can serve you well. 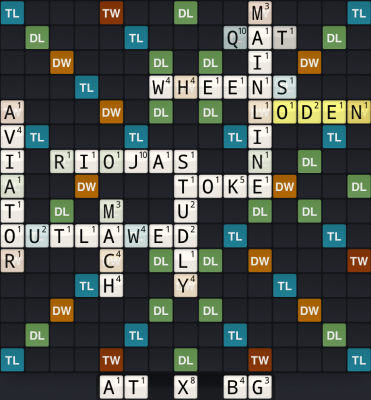 Btw, even though I pulled a bonus twice, my opponent played the word with the most points and this was even my fault. See AVIATOR on the left side? I prepared that one with my OUTLAWED and he was able to play over two triple word fields what nine-folded his points. So don’t switch off your brain while using our Wordfeud Cheat.

I am still ahead with 229 points against 166 points, but have to be more careful where to place my tiles. There are 44 tiles left, so plenty of opportunities.

More like this
Scrabble Dictionaries
Wordfeud Helper online
Word Mole for iPhone is okay, but not the same
Wordfeud