Anagrams might sound like an old word, something we’re more used to seeing in newspapers or episodes of Jeopardy. But anagrams are actually everywhere. Almost any modern puzzle to do with words is using anagrams in some way – word-grabber has the number one Anagram Solver just for you!

If anagrams are all over the place, why haven’t you noticed them before? Well, for one, some are hidden very well, and secondly there is often more than one solution. Even if you know the anagram is there, the intended answer might not be entirely obvious. To put it simply, an anagram is a word or phrase that uses all the letters only once to make another word. Like LOOP: You can make POLO, or POOL. As you can tell, the solution desired by the author can be very unclear unless the anagram is an entire sentence – even then the best of us can be stumped.

Luckily, if you are feeling similarly frustrated, stuck on the latest newspaper crossword, or any other anagram puzzle out there, we’ve got solution for you. Word-grabber has one of the best anagram solvers, with a vast dictionary at your disposal. This solver is not tailored to a specific game and will always give you words that include all the letters you type into it.

Our Anagram Solver is a tool you can use to answer any anagram or word puzzle where all the letters are required. Using our tool is very easy, there are no gimmicks or special features; simply type in the anagram you wish to solve (remember to include all the letters), hit “grab it”, and the solver will spit out all the possible solutions to your anagram.

Whether you are watching National Treasure or the latest Jeopardy episode, word-grabber’s anagram solver is top notch and will get you the answers you need.

But who came up with such a simple puzzle? Well, anagrams are one of the earliest word games in the world, coming all the way from Ancient Greece to the modern Jeopardy show. With such a range, it is easy to guess that anagrams come in great variety too; some can be very easy, others can be very difficult, some with a deeper meaning, others merely a puzzle to solve.

Though the reader must keep in mind that any “deeper meaning” is almost always at face value. Anagrams are only able to do so much in terms of meaning, often giving the subject (or solution to the anagram) one or two careless attributes – as the bygone experts of Ancient Greece quickly discovered.

A Definition of Anagram

Anagrams, as stated in the introduction above, are words or phrases rearranged to either spell something else (Tom Marvolo Riddle is I am Lord Voldemort) or are completely jumbled (HGRIT is RIGHT). Once again, almost all modern puzzles that involve words use anagrams. All of such games have a common theme; at one point or another, the player will be required to use all the letters and only once – the very definition of an anagram.

The History of Anagrams and How to solve Anagrams

Though the concept of anagrams is simple enough, they can be quite complex. For example, it was considered the height of Victorian humor to create an anagram that not only spelled the name of a friend, but also stated something about them. In Augustus De Morgan’s book, A Budget of Paradoxes, he alludes to this kind of anagram humor as something his friend, John Thomas Graves did quite often. Apparently one of Graves’ favorites in reference to De Morgan is “Great gun! Do us a sum!” As De Morgan states, this is a “sneer” at his pursuits. It is obvious De Morgan only takes mild offense, as the rest of the chapter is dedicated to more anagrams of his own name all in jest.

Anagrams as a trend in Acient Greece

Anagrams did not start in the Victorian era, however. In fact, this idea of giving the subject (or solution) of an anagram meaning in some way began as a popular trend in Ancient Greece. They called it “Themuru”, to find hidden and mystical meaning in names, though this is only briefly mentioned in Benjamin Wheatley’s Of Anagrams. Wheatley, our current source for the history of anagrams, is far more interested in later centuries.

Making Anagrams in the 16th and 17th Centuries

In his book, he discusses anagrams in more detail during the 16th and 17th centuries. At the time, according to Wheatley, anagrams were considered a great way to attach attributes to current monarchs. James I (full name James Stuart), for example, was called “a just master” for short time. His son, Charles James Stuart, fared no better with “Claims Arthur’s seat”, a hefty responsibility Charles never managed even in metaphor. Well, neither monarchs were considered very good at ruling, but you can’t blame courtiers for trying to climb the social ladder with flattery.

More than giving monarchs disingenuous attributes, Latin anagrams during the 17th century were primarily used by natural philosophers in order to claim new discoveries before they were ready to be published. In other words: putting a pin in an idea while making sure no one else could read it.

Anagrams made by Galileo

In fact, Galileo was one of the most famous examples of this. He wrote his discovery of Saturn’s rings with the anagram “smaismrmilmepoetaleumibunenugttauiras” with translates to the Latin phrase “Altissimum planetam tergeminum observavi” or, “I have observed the most distant planet to have a triple form.” At the time, other philosophers were eager to translate each other’s work, and not always successfully. Johannes Kepler, for example, solved another of Galileo’s anagrams to mean the moons of Mars, instead of the planet Venus having phases like the moon.

The “Torturing of one Word Ten Thousand Ways.”

During the 18th century, however, anagrams fluctuated in popularity again. Romantic poet John Dryden was particularly displeased with the method of humor, famously stating that anagrams were the “torturing of one word ten thousand ways.”

Despite Dryden’s heavy criticism, anagrams came back in full force during the 1920s, where anagrams were once again popular puzzles and mild humor. In fact, anagrams became so popular that surrealist leader André Breton accused Salvador Dalí of giving into commercialism by giving his name the anagram “Avida Dollars.”

So we come to present day, where anagrams remain a popular form of puzzles, even if they are no longer seen as the height of humor or wit. You can be sure that anagrams will always be around, having moved from written works, to radio, to television, to the internet, and finally to mobile games. They’re fun, unexpectedly complex, and always make you feel like you’ve discovered a cool little secret from within language.

Anagrams are everywhere; you just have to look out for them! They’re in all kinds of names, like TV shows, anime, movies, and plenty more. One of the more popular and well-known anagrams is that of the Doctor Who spin-off show, Torchwood.

As you might already have guessed, Torchwood is an anagram of Doctor Who. The anagram came about during the early production of Doctor Who, when savvy pirates managed to get their hands on Doctor Who preview tapes on their way from Cardiff to London.

In an act of pure ingenuity, one of the crew members decided to mark the tapes “Torchwood” instead. This provided an added security measure that put a stop to the pirating. However, the writer of the show, Russell T. Davies, fell in love with the anagram and it soon inspired him use it as a title for the spin-off series; as if we needed anything more to tell us just how obsessed with the Doctor poor Harkness is, he had to go and name Torchwood after the Time Lord. 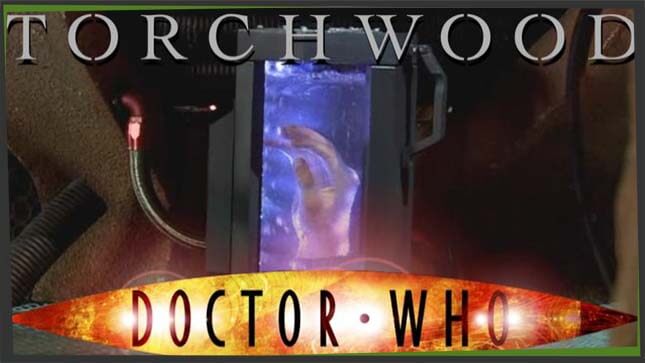 There are, of course, plenty of other anagrams in the world. The TV show Lost is another example, where the character Ethan Rom can be translated into the anagram Other Man. This subsequently refers to Rom’s joining a group called the Others.

Or in the anime and manga titled Hellsing, the main character is a vampire named Alucard. Surprisingly, this is simply Dracula spelled backwards and implies Alucard’s origins within the manga’s story.

For an even more modern take, the TV show Westworld has an anagram too. To be perfectly vague, for any of those who haven’t seen all of season one yet (go do that now), Bernard Lowe is an anagram for Arnold Weber, alluding to Bernard’s reveal at the end of the season. And of course, what he really means to Dr. Ford.

All about Anagrams on word-grabber

Read more about finding anagrams in our articles on word-grabber.com:

The Pure Artistry of Anagram Tattoos