Home » Word Board Games » Outrunning Your Opponent in Scrabble

Don’t get too cute in the endgame – sometimes it is best to dash for the hills to secure a victory!

Standard Scrabble strategy usually calls for the good sense to “leave one in the bag” and keep your opponent guessing. However sometimes all this accomplishes is giving your opponent another chance to fish for the bingo or play that they need to beat you. Sometimes it is simply better to “outrun” your opponent.

”Outrun” Your Opponent with this Tactic

I heard the term used frequently in a video I saw earlier in 2016 by the top US Scrabble expert Kenji Matsumoto.

You can learn more with Kenji Matsumoto at his Youtube Channel.

But let us take a look at a board position from a game I had at the MSI World Scrabble Championships in Lille, France, in September 2016. 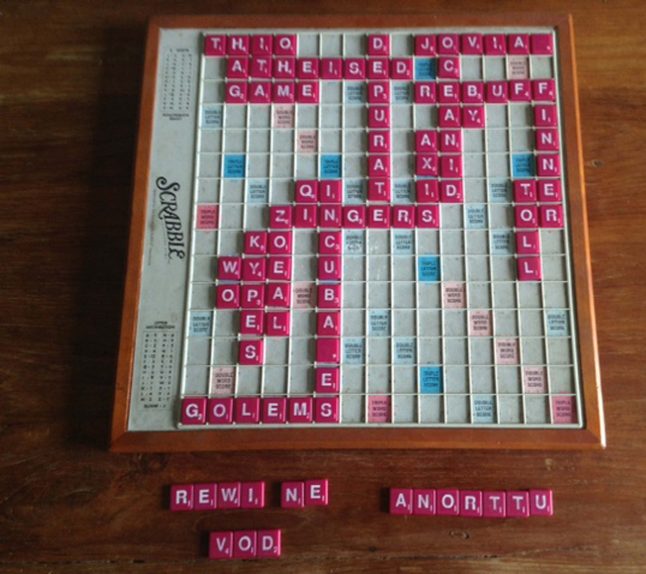 It is a game between me and top Nigerian expert Ikekeregor Dennis. My opponent is a great player and I can be sure that he is up to something when he spends some considerable time thinking about his move. He has just played BY and AY for 24 points at L4 and is 30 behind me after that.

So what is he up to, what can I infer from his play, what is left in the bag, and what is likely to be present on his rack?

I am holding ANORTTU.
He has any seven from DEEINORVW.

So there are two in the bag. Should I play one or empty it? The result of the game very much depends on what I do next. Fortunately I had plenty of time on my clock to consider the possibilities – that is often important in such positions. I used the time I had left to try to figure out what he was thinking and what I could infer from what he just did. I was sure he only had one set of VW at the time. I thought of WONDERER. I could block the R in DEPURATE, but I reckoned that was hard to do and could lead to certain defeat if he had INWOVE down from the last L in TOLL. Then I believed I knew what he was up to by playing just the Y. I surmised that he must have REWINE and was trying to either get a T (both of which were on my rack) for WINTERER or, more vitally, a D. If he drew the D that I thought, correctly as it turns out, was in the bag, then he could play REWINDER – and there were two spots to play that word so I couldn’t block him at all. I figured I had a 33 percent chance of losing that game. That is when I decided to play OUTRAN from the L of TOLL. Sure I was giving him an R, but it made no difference; if he was holding REWINDE I was toast anyway. I may as well go down doing the right thing! As soon as I played OUTRAN Ikekeregor shook his head in frustration, but sportingly acknowledged that it was probably the best move to run for the hills! He had drawn the V and I was left with OD to go out with TOD on the next move after he played REVIEW.

Leaving One in the Bag is not Always the Best

So think clearly and understand that it might sometimes be best to make a dash for the line rather than getting too cute and lose the game. Scrabble is a game where there is a lot of “by the book” thinking, but sometimes it is important to break the mold and do something a little different to win: In this sense leaving one in the bag, which so often is vital, is not always the best thing to do in every circumstance.

Gerry has been playing Scrabble competitively for 25 years. He has played throughout the world using both the TWL and Collins lexicons. He writes extensively on the game, composing both news and features. He plays for Thailand internationally and is resident in Bangkok, where he has lived since 1985. Gerry was the 1998 Champion of Asia and the Pacific. He is currently writing a book about the quirky life of international Scrabble players featuring a broad spectrum of views about the world’s favorite word game.

More like this
How to score high in your Word Chums Game
Are you a word genius in WWF? Prove it by making words with these letters
How Do I Become a Scrabble Champion?
Learning Scrabble with Gerry Carter - About Stems