Home » Mobile word games » Are you a word genius in WWF? Prove it by making words with these letters

It’s fun to kick back and relax with a good old game of Words with Friends, but there’s nothing more frustrating than being stuck trying to make up words with blocks of letters that don’t seem to be producing any results. WWF comes with a couple of options that can increase your chances of creating awesome words and winning several points as you go along. To help you make use of as many options as possible when creating words in a WWF game, we have put together suggestions and tips that might be useful for your next game.

Shuffle Your Letters to Make Words

To get a clearer view of the letters you are dealing with and if nothing comes to mind at first glance, there is a shuffle button. This makes the letters switch places so that you are able to think of words that you may not have thought of when the letters were in different places.

An example would be the following letters, LANOSGLIN. If the letters were to swap places and become SALMOGLIN, it might be easier to put them together, perhaps creating the word S A L M O N for eleven points.

Building on Your Opponent’s Words

You can’t go wrong with fleshing out words; and what better way to do that than building on an existing word? When your opponent has built a word, you could try to look for ways to add to their word, sometimes using only one or two letters at a time.

On days when you might not be feeling all that creative, there is the option of further developing your opponent’s words, like in the example below where the opponent has chosen to spell out the word G R O W with their block of letters. If you have the letter N handy, a good option would be to add the letter to the word so it becomes G R O W N.

But to be able to score really high points, you have to use the triple-letter and the double-word fields in Words with Friends the right way. That means: every time you want to lay down one letter just keep an eye out for what is possible near this letter. 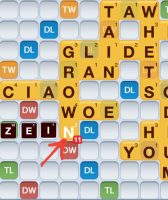 In our example you can set up the word ZEIN, which will in turn reward you with thirty-three points, with the letter Z scoring on the triple-letter field and the N at the end of the word GROW.

Using the Dictionary in Words with Friends the Right Way

Who would have thought that such a useful tool might be overlooked by some people? A lot of players may be aware that there is the option of using the dictionary, to either look up the meaning of words or to find new words during their game, but might rarely make use of it. To give you more options when attempting to create your own words, WWF comes with the option of using a dictionary. You would be surprised by the amount of words that exist out there!

Using Other Helpers to Make Words with Letters in WWF

With the WWF dictionary you will be able to check if a word is a genuine word. It does not give you possible words you can make with your letters. For this tricky situation, we have a useful helper for you: Our WWF Help! 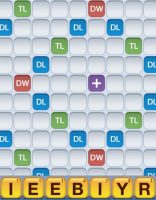 Here you can make short words out of these letters like BEE or BY or EYE, but you don’t score really high. Scoring high with your first words is important in Words with Friends. It is better to lay down as many letters as possible at the beginning. Sometimes you can’t see the long words on your own. Our Words with Friends Cheat can help you out there!

In our examples, the word BEERY (the smelling of beer) would be the best and highest-scoring word in the bunch! With the Y at the double-word-score you will even get 20 points for it.

Making Short Words with Your Letters

The more the game progresses, the less space there is on your board. Now is the time for short words! That’s why it is necessary to know the possible 2- and 3-letter words in Words with Friends. For that option it is easy to learn these words by heart. We give you the list of all 3-letter-words in another article on word-grabber. You can find all the 2-letter words for Words with Friends on word-grabber, too.

Practice Makes Perfect in Making Words with These Letters for WWF

More like this
Outrunning Your Opponent in Scrabble
Watch out Nigel – Scrabble Player A-Cubed is Coming for You!
How to score high in your Word Chums Game
About the Joy of Word Chums - Word Chums Player told us