Home » Word Board Games » How Do I Become a Scrabble Champion?

Becoming a Scrabble Champion is a little more complicated than simply “getting gud” as Dark Souls fans might say. It takes a lot of memorization, practice, and dedication. Once you’ve got that, you can enter yourself into various Scrabble Tournaments, such as the official Hasbro competitions and a variety of local tournaments, depending on where you are in the world.

Let’s be clear, this isn’t easy. This guide is a cursory one for beginners and any Scrabble players who want to improve their strategies. The greatest difficulty lies not only in memorizing hundreds of words, but also in understanding how to use each word properly. If you’d like to dip your toe into the world of competitive Scrabble, take this list to heart and make sure to get ‘er done!

Do you need more help by playing your favourit word game? Or do you not have a official Scrabble Dictionary? Check out our Scrabble Word Finder for finding the right words with points you can get!

Own the Scrabble Dictionary

Step number one: own an official Scrabble Dictionary, not just any Merriam-Webster Dictionary, a Scrabble one. Now that you have your very own Scrabble dictionary, you must study it. Study it like you’re going into a spelling bee competition, so roll up your sleeves and get reading! The Scrabble dictionary is what decides your future competitions. Though you won’t need to commit the entire book to memory, it is good to at least have the majority of the words bouncing around your head. You’ll be memorizing entire lists of words in the next few steps, so this might be a good time to practice.

Alright, you’ve read through the Scrabble dictionary and though you don’t know what WHIO means, it’s a handy word that starts with a W. Your next step is not only to study the two-letter word list, but to memorize it. For your convenience, you can always use our Scrabble Word Finder. For a list of two-letter words, you must type in one letter, input one blank, and hit grab it! It’s as easy as that.

If you would rather see all two-letter words at once, check out our two-letter-words-list!

It may seem like overkill to memorize the two-letter word list, since it is over 100 words long, but if you are truly dedicated to becoming a Scrabble champion you will need to go even further.

If you don’t already know, hooks are a term used in competitive Scrabble to describe words that can be expanded by adding one or more letters. They allow a player to “hook” another word onto an existing one and receive points for both. Basically, hooks are your one-way ticket to an abundance of points. By expanded, I mean words that can be pluralized or made into new words with additional letters, suffixes, or prefixes.

Now that you know what hooks are, you’ll need to know which words belong to that category. First, memorize which two-letter words can be hooks, then three-letter, and last of all, four-letter hooks. It may seem like a waste of time to memorize such short words. In the game of Scrabble, however, hooks are what will get you the most points. In fact, according to Barry Chamish, short words “account for three quarters of the words put down for more than half the points scored.” 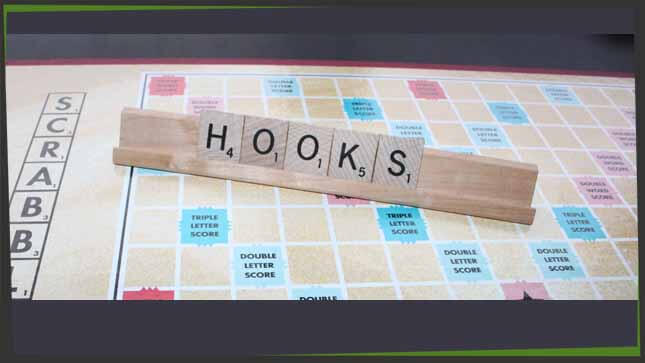 Memorize Words with the Highest Points

Once you’ve got hooks down, it’s time to take a look at the individual words that garner the most points. In Scrabble, this often has nothing to do with length. Instead, the type of letters matter – the rarer a letter, the more points.

Such letters include X, Z, Q, and J, which are between 10 and 8 points each. Then there are the 3-5 point letters, such as B, C, W, Y, and K. So a list of Scrabble words with only consonants might help, or you can use our Scrabble Word Finder and sort by the highest points.

Now that you’ve got an idea of which words and letters are the most valuable in Scrabble, rack management is one of the easiest steps to learn. All you need to do is play strategically by keeping letters you either can use right now, or you know you can use later on for more points.

Scrabble, much like chess, can be played by planning a few moves (or more) ahead. It is not so much about predicting what your opponent will do, but how you plan on getting to the special score tiles. Sometimes, you’ll need to keep certain words or letters in preparation for an open spot.

Much like those talented folk who have memorized a deck of cards and are able to calculate the odds in a given card game, you will need to do something similar in Scrabble. To become a Scrabble champion, you will need to learn which tiles are more or less likely to turn up depending on what is already on the board and on your rack.

For example, there are 12 E’s and 9 A’s, but only 1 Z and 1 Q. Luckily, this information is usually readily available on the Scrabble board itself, or on the player’s manual that comes with the game. Once you can predict (at least vaguely) what tiles you will get, you can plan your game around them.

The Vowel- or Consonant-Heavy Rack

Once you know your odds, and understand how hooks work, you will often encounter racks that can seem useless at first glance. Whether you’ve got three E’s or five N’s, there are strategies to get around them. First, use the lists you’ve memorized and build words on your opponent’s words. Second, do not be afraid to exchange tiles. Missing a turn will do you a world of good if it means getting a better rack out of the deal. There is no point struggling with five N’s when it can halt the entire game for both of you.