Will, you are really addicted to puzzles. First question is about these as well: Why are you so interested in crosswords?

I am interested in puzzles in general not only crosswords, but also rebuses, riddles, variety word puzzles, math puzzles, logic puzzles, and of course mystery puzzles – if there’s a problem to be solved, I probably want to try it out. I started when I was very young. No one else in my family did puzzles, so this was entirely my own doing. I like crosswords because the format is so flexible. They can be easy, medium, and tricky. Obviously, I like the tricky ones, both to solve and create, because that`s how my mind works. And crosswords can take you into nearly every field of human knowledge. I am always learning things and stretching my brain.

Often people say that solving crosswords is something for old people. What makes it interesting for younger ones?

Crosswords have a reputation for being mainly for older folks, but I don’t find that to be the case. The junior division (25 years and under) of the American Crossword Puzzle Tournament (ACPT) is always large. And since I started editing the New York Times crossword, in 1993, I’ve published puzzles by more than 30 teenagers. Before I began, I’d estimate that the mean age of a Times crossword contributor was over 50. Now it’s probably under 35. Crosswords today are more modern, lively, and relevant than ever before, so the audience has grown and broadened.

Will Shortz was born in 1952 on an Arabian horse farm in Crawfordsville, Indiana. At the age of 13 he wrote to Dmitri Borgmann for advice on how to pursue a career in puzzles.

He is the only person known to hold a college degree in enigmatology, the study of puzzles. He achieved it by designing his own curriculum through Indiana University’s Individualized Major Program.

He also earned a Juris Doctor but decided then to start his career as a puzzle editor. He began at Penny Press Magazines and went on to the Games magazine.

In 1993 he started his work as the editor of the New York Times puzzles. Now he lives in Pleasantville, New York, where he works from home.

You founded the American Crossword Puzzle Tournament. Last year nearly 567 contributors tried to solve the puzzles. Why did you found the ACPT?

Part of my goal in life is to bring people together through puzzles. In 1976, when I was 23, I re-founded the annual convention of the National Puzzlers’ League. The NPL conventions started in 1883, but stopped after 1958, which I thought was a shame. Together with a friend I brought them back — and I’ve directed every NPL convention program since then.
In 1978 I was living in Stamford, Connecticut, working at my first job at Penny Press puzzle magazines. A new hotel in town, the Stamford Marriott, was looking for a way to attract weekend business. The director of marketing thought a crossword tournament would be a good way. Inquiries led him to me. And I’ve now directed the ACPT for 38 consecutive years! 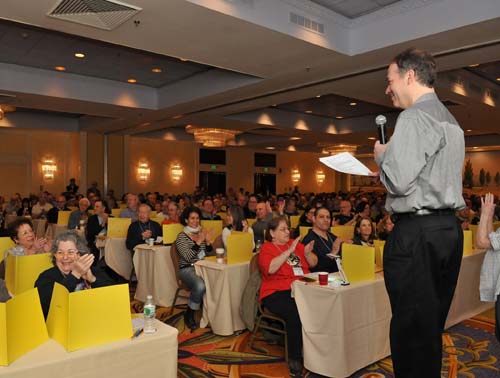 What were your best experiences at the American Crossword Puzzle Tournament? What makes it so great and interesting?

I’ve directed the ACPT 38 for years now, and every time it’s over I think, “Wow, that was the best tournament ever.” I love the people I meet at the tournament. They’re smart, interesting, and well-rounded, with flexible minds. Often they have great senses of humor. They’re a good group to hang out with. If you’re a puzzle person and you attend your first tournament, it’s like discovering your lost tribe. I can’t pick a favorite ACPT experience out of so many. But anyone who has never attended should see the 2006 documentary “Wordplay”, which is largely about the ACPT. It’s a terrific film even if you don’t like puzzles.

You are the host of the World Palindrome Championship, too, which will be held in 2017. Why on earth palindromes?

Palindromes are beautiful. Anyone who can create a smooth, sensible, original one is a genius.

“Crosswords are an easy field to break into.”

I don’t play Scrabble, because I’ve never memorized the legal two-, three-, and four-letter words. Also, it feels too much like my work to be relaxing. But I love Boggle, as well as an out-of-print word game called Razzle. Also, I play an original word game with license plates when I’m on the road.

Ah, okay, Boggle is a nostalgic word -search -game. But let us come back to creating crosswords. Is it possible to live from creating?

What is your advice to young people who want to create crosswords professionally?

Crosswords are an easy field to break into. They’re not terribly remunerative, but anyone can do this. The website Cruciverb.com has a list of all the major American markets for crosswords, along with their specifications for submissions. Also, I recommend “Crossword Constructor’s Handbook” by Patrick Berry, which is available (in electronic form) from Aframegames.com. That has the best advice for making and selling modern crosswords.

Will, thank you that you had taken some time to answer our little questions. But I have just one last question: What was the best crossword clue you have ever made?

My favorite crossword clue ever is one I wrote earlier this year for a Puns & Anagrams puzzle.

Answer to the clue

showhide
An unequivocal rejection (the spelled-out version of the clue, with the C and O put back in) is NO CAN DO — which can also be read as “no C and O.” That’s a second way of interpreting the clue.

Do you want to know more about solving Crossword Clues? Just check out our other articles about it!

More like this
Behind the Scenes of Word Chums – An Interview with Kenny Newell
The Top Five Searched Animal Crossword Clue
“Crossword puzzles involve a significant amount of wordplay and creativity.”
Hangman, a world classic game

Characters, words, sentences - Since I can write, I'll do this and that with great passion! But writing is not only a hobby. Since 2011 I am working as a freelance journalist for different media.