Home » Word Board Games » How much does luck affect a typical Scrabble game?

Sometimes it can be frustrating to play a Scrabble game: your rack contains three I’s and you draw another one, your opponent always obstructs the fields you were intending to use, or you are still waiting for a particular letter tile. In this case, luck isn’t on your side no matter how skilled you are. Luck and skill both affect your chances of winning a game. But how can you make games fairer?

In official Scrabble tournaments they often play multiple games between each pair of players to even out the playing field and average out the variability in tile draws. Thus they are trying to minimize the luck and put more focus on the skills of the participants. To get a better understanding of the luck-skill-interaction in Scrabble games Andrew C. Thomas, professor of Statistics at Carnegie Mellon University, carried out a study on this issue. He published his findings two years ago under the name Variance Decomposition and Replication In Scrabble: When You Can Blame Your Tiles? At first glance it sounds quite mathematical and maybe not all that enticing, but try to bear with us because Thomas has some cool ideas and discovered some interesting facts.

Thomas was asking himself how it would be if there was a Scrabble player who was as good as his opponent and you were to assess luck by supplying a fixed order of tiles? Then you might be able to estimate what “luck” means in a Scrabble game. To do so, you would only need to let those players play this fixed game a number of times to eliminate the so-called “skill factor”. This means that they will always get the same letters, but still the strategy might vary from game to game. The scores will vary across games, but in the end the player with the better order of tiles is luckier than the other.

One Problem: How to find two equally good players who are willing to play the same game over and over again? The solution is of course a computer software. Thomas used an open source Scrabble program and statistic software that simulated hundreds of games for him. With some modifications he could prevent the virtual Scrabble players from using the same words in every game. Otherwise the whole effort would be nonsense.

Another problem is of mechanical nature. How can you guarantee the same sequence of letters? There is still the possibility that a player can build words consisting of all seven letter tiles from the rack, which means he gets 50 points and has a bingo, or that he can’t apply any tile. The variation in word length makes it hard to guarantee that a player always draws the same tiles. To solve this problem, the professor used the predetermined letter sequence not in one direction, but in both. Player 1 starts drawing from the left side of the sequence. Player 2 from the right side. 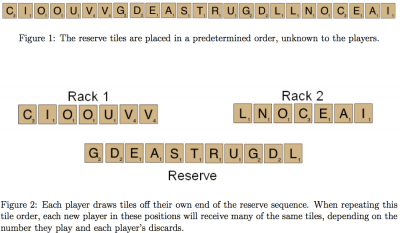 During analysis of all these games he concentrated on every single letter, its position in the determined sequence, and when it is drawn by which player. Here is an example of how he presented his results for the letters Z, X, Y and Q:

On the left side of the chart you can see that Player 1 starts out the game with each tile. The height of the lines depicts the score of Player 1 under these conditions. In contrast to the Q, the Z is generally beneficial to the player who draws it in the beginning. Analyzing all the graphs, Thomas made some interesting observations. Here is an extract:

The entire paper, with the subtitle When you can blame your tiles, can be downloaded as a pdf-file.

More like this
News and Feedback in May 2013
Words With Friends free?
What is the longest word in English?
Alphabet soup