Our evening trying out the new Scrabble Twists and Turns had a lot of great moments and different players were constantly taking the lead. Although it is definitely part of the Scrabble family, the game is a rather different game from what you are used to as a regular Scrabble player and takes some getting used to at first. But does that really have to mean that it’s bad and the spirit of the original game is ruined?

The game can be played by 2-4 players and lasts untl  one of the players gets rid of all of his or her tiles. Each player has 7 letter tiles before him in front of himself that he can use to play a word.  Each word laid down by a player has to adjoin an already existing word. The words played have to be real and the other players must be able to find them in a dictionary or some other place of reference agreed on before the game.

Setting up the Game

It sounds like Scrabble Twists and Turns is not so different from the regular Scrabble game. The first and greatest difference in setting up the game is that there is no board. The table will be your board. The second difference is that there are more tiles in Scrabble Twists and Turns (108, to be exact). These tiles are divided evenly amongst the players at the beginning of the game. After your turn is over, you draw new tiles from your own pile to replace the tiles you used during your turn.

The tiles in Scrabble Twists and Turns are not the usual square shape, but they are round. They fit together thanks to a little circular notch cut into each one. Remember, there is no board on top of which to lay the tiles. You simply place the tiles on the table, however you want to – you can twist and turn them any way you like. Another difference is that the tiles themselves have no score. The goal of the game is simply to get rid of all your own tiles. In addition to the letter tiles, there are also a couple of tiles that allow special moves. There are some that will let you give some of your own tiles to your opponents, others that will change the direction of play and yet others that will make the next player miss his turn. You can add these special tiles to any letter of the word that you have just played.

As always, the players take their turns playing words made from the tiles in front of them. The tiles which the players can play are not hidden from the others, however, but lie openly in front of them. Furthermore, moves such as simply lengthening a word with a plural –S, for example, are not allowed. You have to use at least one of the letters in an existing word to form a whole new word. Scrabble Twists and Turns, even allows you to use more than one letter of a word to make a new one. If a player has played ROSES, for example, the next one can play the letter C next to the O and the letters T and S next to the S, and he gets COSTS. 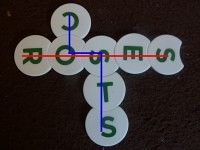 First off, the rules are not very clear on some particulars of the game. For example, since you are allowed to lay words backwards as well as forwards, are you allowed to use two or more letters of one word backwards to create a new one? Additionally, it is not really clear whether it is possible to make a new word and use one of the letters as an additional letter on an existing word (like the letter S in a new word would make a plural of another word). Another area of improvement might be the possibility of giving tiles away to your opponents. The players naturally give away challenging tiles (the ones with the most value in regular Scrabble), which often leads to handing the pieces back and amongst the players.

The game bears a great resemblance to the original Scrabble, but it feels like a whole new game. The twisting and turning of the tiles is rather fun to do, and you can even try to lay your tiles in such a way that the other players can never use the E you played – since the tiles cannot be moved once they lie on the table. This is something that we made good use of from the very start, as well as the possibility of playing words backwards. The ability to make twisting new words (like ROSES and MOST) is a feature we rarely used, however, because it is not easy to switch to that kind of lateral thinking. It was great fun, however, when someone did play a word like that, and he was usually congratulated on his skillful gameplay. The back-and-forth, up-and-down, wriggling way the words are laid on the table hold a certain fascination and give a feeling of creativity. I think you can generally be a little more creative in this version of the game than the original, because there are many more possibilities to play your letters.

Overall, the feeling of Scrabble Twists and Turns is a much different one than what we are used to. Our love for the Scrabble board, the linearity and the letters that have become dear to us because of their rarity and great value are completely lost in this version. Nonetheless, since these two versions are so different from one another, maybe they shouldn’t be compared. Scrabble Twists and Turns is a game well worth trying out. If you do, do not expect to be playing regular Scrabble. See it as a new game and a new opportunity to be creative. And if you don’t like it, there’s always the beloved original version waiting for you on your shelf.