Growing up and being thrown into a complex and hectic adult world sometimes cause you to take a retrospective point of view on the unconcerned times in life when you were a child. The museum The Strong in Rochester, NY gives you the opportunity to relive this feeling as you walk through their National Toy Hall of Fame. The Strong, situated south of Lake Ontario, sees itself as an institution that is “devoted to the study and exploration of play”. We asked two of the people in charge about how the word game Scrabble was inducted to their National Toy Hall of Fame.

The National Toy Hall of Fame – a Melting Pot of Play

Founded in 1998, the museum The Strong represents a cultural melting pot since it not only houses the National Toy Hall of Fame, but hosts play-related institutions like the International Center for the History of Electronic Games and The Brian-Sutton Library and Archives of Play as well. While visitors of The Strong are offered a huge selection of historical material and various toy and game exhibits, we want to focus on the honorees of The National Toy Hall of Fame. 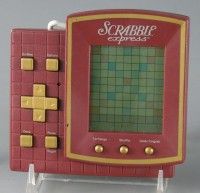 Since 1998 there have been a total of 53 toys or games inducted to this Hall of Fame. The game Scrabble was added in 2004. The reasons for choosing the popular word game and the usual procedure for selection were explained to us by two of the people in charge: Shane Rhinewald, Director of the Public Relations for The Strong, who is assisted by Curator Nic Ricketts.

How to Choose the Toy of Toys

Usually two outstanding toys are inducted to the Toy Hall of Fame every year. Shane Rhinewald states, that “sometimes a third special toy may be inducted. In the early years of the National Toy Hall of Fame, before it came to The Strong in 2002, larger groups of toys were inducted.” That’s why 11 toys were listed already in the first year of its existence. But before a toy is chosen, anyone can send in suggestions. “Last year (2013) we received more than 3,500 nominations for about 300 different toys,” Rhinewald says. Once all suggestions are collected, the final honorees are first narrowed down by the museum staff and then chosen by a committee:

“Museum staff considers every toy nominated in the prior year and researches each of them to determine which of those toys best meet our criteria. From that list, the staff produces a list of 12 finalists that goes out to our National Selection Committee, made up of play scholars, toy experts, teachers, etc. Each committee member picks three favorites, and museum staff tabulates those results.”

To get onto the shortlist, nominated toys and games have to comply with some criteria. There are three criteria nominees always have to fulfill and one that is an optional criterion, as described by Shane Rhinewald:

The toy is widely recognized, respected, and remembered.

The toy is more than a passing fad and has enjoyed popularity over multiple generations.

The toy fosters learning, creativity, or discovery through play.

The toy profoundly changed play or toy design. A toy may be inducted on the basis of this criterion without necessarily having met all of the first three.

For every honoree in the National Toy Hall of Fame there is a short biography of the toy authored by one of The Strong’s curators. Short descriptions capture the history as well as the meaning of the toy or game and why it was selected.

Scrabble’s biography implies that the three main criteria are covered. First is the criterion of Discovery:  “little changed from its original form, proves that the best games let players play pleasantly, learn unconsciously, and socialize easily.” But Icon Status and Longevity also fit the popular word game. Formerly being called Lexiko and then Criss Cross Words, Scrabble hasn’t changed much as far as design and rules go. But in the early years it wasn’t very popular among players. It was only under the board game’s former owner, Selchow & Righter, that its commercial success started in the early 1950s. 4.5 million copies were sold in the United States in 1954. The today owner Hasbro sells 2 million games yearly in the U.S. and even more internationally.

Scrabble became one of the most sought after word board games, so various editions were established for young and old. With editions for non-English speakers (Hebrew Edition), video games (for the computer and PlayStation) or variations with cubes instead of tiles – Scrabble conquered all levels of play. The Strong owns about 30 different examples of this honoree acquired by donation or purchased. Their oldest examples are three editions of Scrabble from 1953. If you won’t have the chance to visit the museum yourself, you might enjoy the homepage of The Strong and their National Toy Hall of Fame online. You will not only be clicking through different editions of toys and games, but maybe also through some moments of your childhood.