At the age of about six months, a child will speak his/her first words. In her/his second year of life, s/he will have built up a vocabulary consisting of up to fifty nouns, simple verbs, and adjectives. Normally at preschool age all sounds will be correctly formulated and his/her vocabulary will enable the child to express him/herself in a more sophisticated manner. This means even abstract concepts will have been mastered with childlike competence. At this point at the latest it is about time for an initial foray into Scrabble! 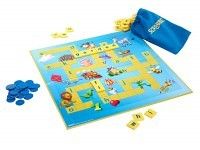 The manufacturers of this most beloved word game are certainly aware of this and have created “Scrabble Junior“. This child-friendly version of Scrabble can pretty much grow with the age of the child. The double-sided game board incorporates a variant for children five to seven years of age on one side and a version for older children aged seven to ten on the other. Two to four players can take part in a game.

In the simpler version of Scrabble Junior, young players connect letters with words on the game board. The words have been preprinted on the playing field and only have to be covered by the letter tiles until a complete word has been constructed. You can put as many letters on the board as possible and you must always start with the first letter of a word. Subsequent letters can only be laid down in the proper order; no letter can be left out. Indeed, you are also allowed to “continue writing“ on any letter for which you possess the succeeding letters. Each complete word is rewarded with a chip. Child-friendly illustrations on the playing field also show each word’s meaning, thus giving children more security in their comprehension of the words. Incidentally, the words are also uncomplicated. The selection is composed of nouns made up of no more than three syllables and are sure to be familiar to a child of preschool age. Besides words like WATER, GOAT, or TIGER, words such as CANDY or ARCADE must also be formed.

Things get a little more difficult in Scrabble Junior when the child resolves to play a game on the flipside of the game board. Use of this variation is recommended for after the child has first entered school and has more experience reading and writing. Here words must be constructed independently, as they are in adult Scrabble. Each player will receive seven letter tiles at the start of the game. The point values are, however, simpler to calculate than in the original version. Once the word has been laid, you can look to see how many colored boxes (blue and red) have been covered and you will earn the corresponding amount of colored chips. A point value is written on the back of each chip. A blue chip is worth one, two, or three points. A red one is worth four, five, or six points.

Anyone wanting to start with Scrabble even earlier can try out “My First Scrabble“ for children three years or older. Even though this version no longer has all that much in common the original, it can nonetheless be seen as a preliminary step before trying the real Scrabble. After all, here too you are required to build words and spell. The game contains fifteen learning cards with four different levels of difficulty. Each card displays four words composed of three or four letters that must be covered by tiles. An additional pictorial depiction shows the word to be built, as in the easier version of Scrabble Junior. The tricky part is that the letters must be affixed to the card and only fit if they are correct. Colored slots matching the various colors of the letter tiles assist further. This alphabet learning game is also ideal for playing alone.

A rarity among the Scrabble games for children between six and twelve years, the “Scrabble for Juniors“ from the sixties is unfortunately no longer in production. It was presumably the first version of Scrabble for children. This version is similar to the “Scrabble Junior“ of today since it also has a double-sided playing field with two levels of difficulty. The front shows the complete word to be laid as well as a pictorial depiction. Even the more challenging version on the flip side is a slimmed down version of the original Scrabble game. For anyone whose first experiences with spelling were with “Scrabble for Juniors“ and wants to bring back some of those memories: the highly sought after retro version can always be found in relevant auction and sales exchanges on the internet.

More like this
A, B, C: How We Make Words with These Letters
Palindromes - a language's 4-wheel racecar
Our Happy Holidays Raffle Winner: a letter carrier’s way with words
Chutney for 15 Points - Scrabble in India