The people who play Words with Friends find the game very interesting, amusing, and educational. It draws more than 20 million active players on a monthly basis, meaning that it is also very popular. Actually, Words with Friends is currently one of the most popular games in our virtual space.

In this article we will answer the question: How many of each letter is in Words with Friends?

How many tiles of each letter are in Words with Friends?

There are 104 tiles available during any one Words with Friends game match. Of these, 102 tiles are emblazoned with one of the 26 letters of the English alphabet, while two are blank. On the graph you can see the number of tiles and corresponding point values for each of the letters in Words with Friends. 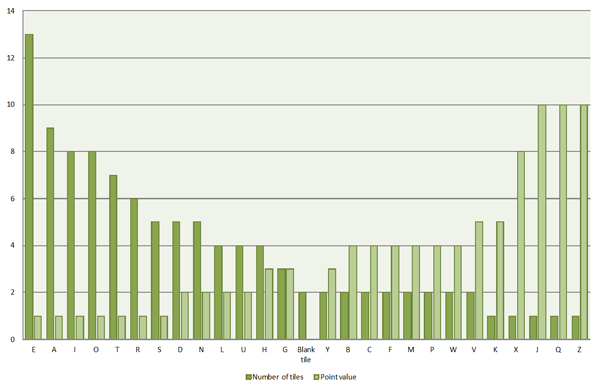 The point value of each letter in Words with Friends

There is an inverse relationship between the number of tiles and point value of the letters in Words with Friends. As a general rule, more frequent letters carry fewer points, while less frequent ones carry more. The least frequent letters such as J, Q and Z carry 10 points and are the most valuable ones. In contrast, there are two blank tiles (* on the graph) that carry no points at all. The letters S, R, T and almost all of the vowels (except U) carry just 1 point, since they are the most frequent letters in Words with Friends. Point values for other letters can be seen on the graph above.

There are also premium squares on the board that can significantly boost your score by doubling or tripling the point values of letters or entire words: DL (Double Letter), TL (Triple Letter), DW (Double Word) and TW (Triple Word).

Frequency and point value of each letter – the short answer

How to play with the blank tiles (*) and with the high-scoring tiles?

During a Words with Friends match you can easily recognize blank tiles on the board since all other tiles have their point value shown on them and blank tiles do not. They carry no points at all and can be used as replacements for any of the other letters. However, blank tiles can bring you a lot of points indirectly if you use them cleverly, such as when they are used to reach one of the premium squares or to connect your word with other words and get those points too. As a general rule for gaining a lot of points in a match, do not use the blank tiles quickly and without thinking about ways to use them to build high-scoring words. On another note, high-point letters such as J, Q, Z and X are very difficult to play, since comparatively few words are built using them. A good strategy to deal with these letters would be to use them as soon as you get them, as well as to learn some short words containing them. Read more about some other strategies to boost your score in a game of Words with Friends.

More like this
How many letters are in Scrabble?
Funny Anagrams – A Selection
Play Scrabble online – TOP 5 Links
Words with Friends Instructions