The internet is full of a wide variety of entertaining and educational word games that keep players engaged while challenging their quick thinking skills. While games such as Scrabble and Words with Friends have garnered a lot of the spotlight, especially as mobile phone apps, there are other options out there like WordStone. WordStone offers a unique twist on the average word game, combining the mental challenge of games like Scrabble with the time constraints of gamer favorites like Bejeweled.

As the name would suggest, WordStone is a game that revolves around scoring points for putting together words on the screen. Presented as a mixed up set of tiles, players must move and swap tiles around the board to form words. When words are formed the tiles disappear from the board and are replaced, in time, with new letter tiles to allow for the formation of new words.

Players are rewarded points for the words they put together based upon a variety of criteria. Words must contain at least three letters, and points are awarded based upon the length of the word and overall difficulty of forming that particular word. For example, arranging the tiles to form AND will earn a player points but is far less difficult to arrange then SQUARE. Therefore, more points are awarded for SQUARE than AND.

As mentioned, WordStone is played by forming words that are between three and eight letters in length. Words can be formed horizontally or vertically, and when it works out that tiles are arranged to form two words tangled with one another they can both be submitted at the same time for points. For example, if AND and DAD intersect at the D, both can be submitted simultaneously for points.

Moving tiles around can be confusing, especially when the pace of the game picks up. In order to move a tile, gamers must click on the tile they want to move with their mouse. From here gamers have two options. First, they can simply move their mouse where they want to place that tile and click to set it in place. Alternatively, they can click on another tile to swap the initial letter for another one to complete a move. 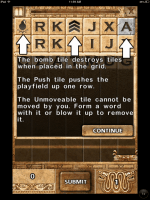 Once words have been formed, users can click on the “submit” button to submit their word for scoring. It is easy to identify when the game will accept a word as it highlights the tiles in yellow for acceptable words. There are a few useful tips to keep in mind while gaming. First, WordStone offers a list of special words on the right hand side that if formed offer gamers more points. Additionally, from a gameplay standpoint, it is a good idea to use the “spacebar” or “S” keyboard shortcuts to submit words. This makes it easier to submit words quickly and keep moving without averting eyes from the board to find and click the submit button.

There are three types of special tiles in WordStone that gamers need to be aware of. First, there is the bomb tile which allows users to blow up surrounding tiles in order to remove them from the equation or simply free up space on the board. Next, there is the push tile which allows users to buy themselves extra time by pushing the tile rows back up one row. Finally, there are stone tiles with letters that can only be removed

from the board by forming words with them or using a bomb tile on them. They cannot be moved around the board.

All of this activity is set against mankind’s ancient enemy, time. On the left side of the screen there is a timer that fills up slowly at first. Each time the timer reaches the top, it will push a new row of tiles onto the board, consequently pushing the bottom row of tiles closer to the end game line. This line, if crossed by any tiles in the bottom row, ends the game.

As gamers level up, the board is cleared and users start over. However, with each level up the timer will fill up faster and new rows of tiles will be added. This means it is imperative for a gamer to be thinking quickly in order to form words and remove letters from the board before more rows are added.

WordStone isn’t your average word game; that much is clear. Rather than simply forming words and waiting for someone else to respond, gamers are challenged to visualize and rearrange tiles to form words as quickly as they can in order to score points and level up. WordStone is perfect for the well-coordinated gamer and those with a quick wit.

The average gamer will probably find that each game takes about 10 minutes before it becomes too difficult to keep up with the pace of the timer, but that short amount of time combined with a disdain for defeat will keep gamers coming back to try and beat the clock again and again.

To play WordStone online simply visit the page we included the game into.